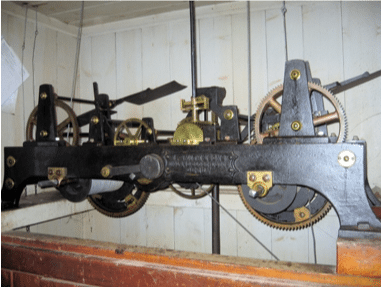 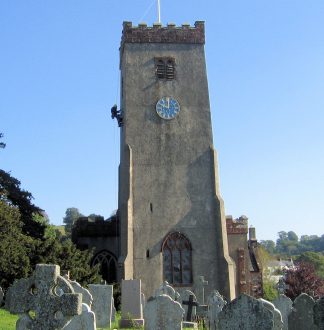 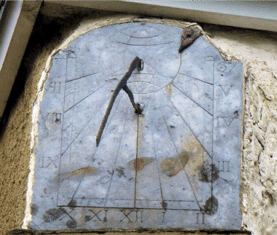 The Church Turret clock was installed in 1905 by John Smith and Sons of Derby. It was given by the last Squire of the village, Frederick Churchward, a great benefactor here who also gave the third bell, the eagle lectern and a large window in the south side of the church.

For most people the only way of telling the time of day before public clocks were installed was by sundial: there is still one in this village and a lovely one in the grounds of Totnes Hospital. In the early days of public clocks, they were set by reference to a sundial. Sun time is different in England at various times in the year only coincident with Greenwich Mean Time four times in London, in April, June, and September and on Christmas Day; it is later west of London: about fifteen minutes here in Stoke Gabriel.

Before the 1800s clocks were rare, in London a few women would sell the time to manufacturers; they would check the time at Greenwich which was controlled by astronomic time and set their own timepieces and then travel around the city visiting various factories. With the coming of the railways standard time was required all over the country. Most clocks on public display, town halls, schools, and stable yards of large country houses are Turret clocks. Our clock has two faces, one on the west side visible from the river, and the other on the north. Stoke Gabriel was mainly populated on these sides of the mill pond one hundred years ago. The famous yew tree obscures the north face from some parts of the village now and it is hidden from Hill House (the old Gabriel Court Hotel), where the Squire lived, by the large Lawsonia Cypress tree next to the Lych Gate.

This is a picture of our clock: it was taken by me, it shows The Three Train Turret Movement. On the right is the hour driving wheel which is connected to the tenor bell, over on the left is the striking wheel connected to the quarter bells. The small dial in the centre is connected by the going train to the external hands by the vertical rod and can be released completely from the movement to adjust for British Summer Time. The vertical rod is joined to bevel gears a few feet above in line with the centre of the clock faces, from there horizontal rods connect to the motion gears just behind the faces. The pendulum is made from different metals to allow for various rates of expansion due to heating and cooling keeping the pendulum the same length the year round and consequent timing. The weights are enclosed in a cupboard and when unwound reach down to the ground floor about twenty feet below. The clock is in excellent condition and the weights are wound up regularly each week by our verger Norman Betts assisted occasionally by John Ball. The maintenance of the clock is carried out by Smith of Derby, apart from overhauling the moving gears they paint the external faces.

The craftsman abseils from the top of the tower in a bosun’s chair and paints the faces with several coats of paint, the undercoats all over a light bluish grey, then a dark blue and finally gold leaf is applied to the numerals and hands.

There are many ways of telling the time nowadays with extreme accuracy. The caesium clock at The National Physical Laboratory in Teddington Middlesex is the most accurate clock in the world. Ground Positional Satellites, Computers, electronic Tablets, Smartphones and Radio timing transmissions all rely on it.

Apart from rushing to catch a bus and train or going to church, do we really want to know the time? I venture to suggest that we look at a clock to gauge how long it is before we do the next task!

It is comforting to know that when I am wearing gauntlets covering my wristwatch, in the garden and I hear the church bell chiming that I am sharing the same sound with other people in the village. The church clock has been here for more than one hundred years; let’s hope it will continue for many more but…… you can still use a sundial!