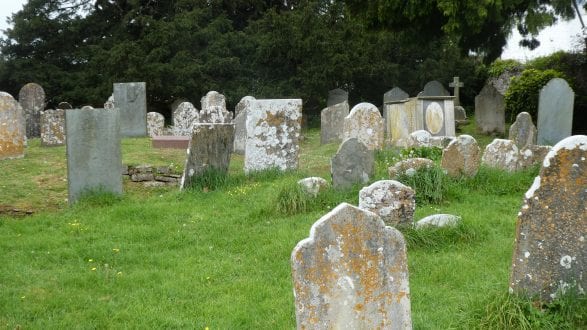 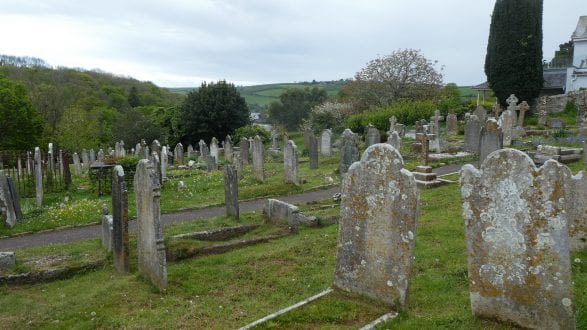 The use of a churchyard as a burial ground for the deceased was first proposed by Pope Gregory the Great in the 5thcentury so that those attending church services would walk past the graves and remember the dead in their prayers. Two centuries later, Cuthbert, the Archbishop of Canterbury, consecrated the first churchyard and by the 10thcentury the corner boundaries of churchyards were marked by wooden crosses. Since the 11thcentury, substantially all new churches were built at the outset with churchyards for use by parishioners as their burial grounds.

In the mediaeval period, churchyards were very different places. With little more to mark a grave than a wooden cross, there were no headstones or other monumental stonemasonry. Headstones did not enter into general use until the 17thcentury and later still in some parishes. Before that time, the grounds would have been used repeatedly for subsequent burials and the few families who could afford the cost of a memorial chose to have it inside the church building itself.

Churchyards were not only used as burial grounds. Those in a rural location were normally grassed, affording grazing pasture for sheep. Exploited by the rector or vicar, the practice often resulted in complaints not least because of the damage caused to graves. Such was the case in 14thcentury Stoke Gabriel when the rector of the church, Walter Meriet, who was the Chancellor of Exeter Cathedral, leased the churchyard as farmland in return for rent. Bishop Grandisson of Exeter severely reprimanded his Chancellor but was unable to end the practice.

Churchyards were also community venues for secular activities such as markets, games and sports, feasts, drinking church ales and general merry making. All such activities typically took place on the unconsecrated north side of the churchyard, leaving the consecrated south side for burials. Those buried on the north side – the side on which the church would cast its shadow – were generally regarded as less worthy. After the Reformation in 1534, many of these activities were discouraged but still persisted for decades and did not cease until the rise of Puritanism in the late 16thand early 17thcenturies. Stoke Gabriel was slow to comply and was still making church ales and celebrating the Whitsun rushbearing festival in 1622. Boisterous games were singled out by Puritans for particular objection since they encouraged gambling. King James I however decreed that traditional churchyard games should be encouraged as long as they had no negative impact on divine services. The decree greatly provoked the Puritans who, following the collapse of the Church of England in 1641, outlawed all such activities.

In the mediaeval period, the deceased would be wrapped in a linen or woollen shroud and watched at home until the funeral service several days later. Wooden coffins were not then in general use although were sometimes available for loan for the duration of the watch and for transporting the corpse to the churchyard. The minister would meet the deceased at the lychgate and lead the cortege into the church for the service and thence to the grave for burial. The Catholic funeral ceremony involved much ritual which substantially survived the Reformation but was banned once the Puritans gained Parliamentary control. In 1645 they abolished the Book of Common Prayer and replaced it with the Presbyterian Directory of Public Worship. This generally prohibited any ritual that was remotely “superstitious or had a papist legacy” and expressly provided that “burials should be undertaken without ceremony, specifically without singing, kneeling and praying before the dead body”. Again, historical records show that Stoke Gabriel was slow to comply with these changes and that their parish vicar, Rev’d Daniel Getsius (1636-1672), did not subscribe to Presbyterianism, nor to the Republican Commonwealth, and was imprisoned for a Royalist sermon.

The austere period of Presbyterianism that characterised the Republican Commonwealth did not last more than a few decades and the Church of England was re-established shortly after the restoration of the monarchy in 1660. While there was no widespread return to the use of churchyards for secular activities, there was an almost immediate cessation of the brutal simplicity of Presbyterian funerals. The Book of Common Prayer (BCP) was revised and re-introduced in 1662 and provides the Office for the Dead which still governs funeral services today. Subsequent reforms (BCP in 1928 and Alternative Service Book in 1980) have taken place but none raised any significant theological issue. Prayers for the dead have been made optional. Cremations have become a common practice for the disposal of the body and funeral services reflect an increasing emphasis on thanksgiving and celebration of a life lived.

The churchyard surrounds the church and is bounded by stone wall on the north, west and east sides and by local flora and wood fencing on the south. The churchyard is on two levels – a higher level and a lower level – that are separated one from the other by a retaining stone wall that runs between the west and east boundary walls south of the church.

The higher level is the original mediaeval churchyard and, in alllikelihood,isat least as old as the church itself, dating it to the 13thcentury. It may be older still since the earlier chapel (which existed to the north and east of the church within the churchyard boundaries) may have had a burial ground associated with it. The higher level is also the location of a thousand year old yew tree. Yew groves and trees were sacred places to ancient Britons and the tree may be older than the church or chapel. The much-loved tree has borne witness to centuries of activities and events in the churchyard. In 1836, many parishioners met under the tree to say goodbye and present a “handsome silver tea service” to their curate, Rev’d Kitson, who had been presented to the living of St Veep, Cornwall. A sapling yew was planted in the north east area of the churchyard in 2000 to commemorate the start of a new millennium.

The churchyard contains graves marked by memorial headstones and cremation tablets as well as many older graves, probably in the order of thousands, unmarked by any memorial. The headstones are of a variety of materials from local limestone to granite and slate with creative designs and thoughtful epitaphs. The oldest headstones date from the 18thcentury and are located around the yew tree and to the east of the church. As reflected by the orientation of the headstones, the graves adopt the long-held tradition of burying the dead with their feet towards the rising sun and to face the Lord when He approaches from the east on the final day of judgement.

Not all the names on the memorial headstones correspond to people who are buried. Many are the names of relatives who died elsewhere and are simply being remembered. Nor are the names necessarily their full names; some include initials or familiar names. An accurate record of the people buried in the churchyard and their full names requires referral to the parish burial registers, which date back to 1539, the year after Thomas Cromwell issued an injunction obliging parishes to keep such records. Such burial registers are held at the Devon Heritage Centre in Exeter and are also digitally available online at Ancestry and Findmypast.

The area to the south of the church, which was traditionally favoured for burial in the middle ages, afforded limited grave space, even allowing for the absence of the south aisle which was not added until the late 15thcentury. Nonetheless, in the excavations for the building of a new south porch undertaken in 2017, eight unmarked graves were discovered. These were a mix of coffined and shrouded burials dating to between the 16thand 19thcenturies.

Many of the graves have multiple occupants. In particular, Grave 808(2) seemingly contains 10 adults belonging to three generations of the Baker family who died from 1788 to 1895. There are also many graves of infants only days or weeks old, reflecting the high level of infant mortality in past centuries. Of particular note is Grave 685 which contains six infants aged from 6 weeks to 6 years of the Narracott family who died from 1883 to 1891. At the other end of the scale, the churchyard contains the graves of at least two centenarians, namely the graves of Dorothy Maplebeck (Grave No 634) who died aged 101 in 1984 and Edward Brewer (Grave No 995) who died aged 103 in 1793!

There are five Commonwealth war graves, which are:

The south east corner of the upper level of the churchyard is marked by an absence of headstones. It is the burial ground of many parishioners who died in the 1830’s from cholera. There was at one time a memorial consisting of steps surmounted by a broken shaft (DCNQ, 1933, Vol XVII, page 314), which no longer survives. There was also a holm oak tree, planted in remembrance of the deceased, but that too no longer survives, having been blown down in a gale some 50 years ago.

On the west side of the churchyard is the grave of Selina Lever (Grave 799). She was the housekeeper of Vicar Nevill and died in 1887 while in the care of the vicar. Her death was the subject of an inquest because the vicar did not obtain a medical practitioner’s opinion before the death certificate was issued. She was buried before the inquest and had to be exhumed. Following a post mortem, it was established that her death had nothing to do with Vicar Nevill’s ministrations and that she had died from natural causes. Selina Lever was re-buried.

Although it is still used for burials and cremations, the churchyard will become full in the next decade or two, at least for burials. A peaceful place, the churchyard contains many south-facing benches for people to rest, contemplate or simply enjoy the views across the Mill Pool to South Downs Wood and the River Dart.

Available as linked files to this site, the Registers provide a listing of churchyard graves which have been marked by a memorial headstone or cremation tablet, and the Plan provides the location of the listed graves. There are two Registers, one listing the graves by surname(s) in alphabetical order and the other listing the graves by number. The two Registers and Plan are also available for inspection at the west end of the nave.

To locate a grave, it is best to refer first to the alphabetical register to make a provisional identification of the grave number, and then refer to the numerical register to confirm the grave and its number. Reference to the plan should establish its location in the churchyard. Not all graves included in the registers have headstones or are readily legible and it may be helpful to refer to the identity of neighbouring graves. Some graves have no identifiable marking at all, save for their existence.

The Registers and Plan were originally produced in 2000 by Ken Young, Bill Wilton and Derek Martin with grateful thanks to Norman Betts the Verger, Mrs May, Mary Tucker and Brian Moorehead. They have been updated since that time by Ken Young and Norman Betts and are up to date as of November 2019.

It is almost impossible to produce registers of this kind without errors and omissions for which the authors apologise in advance. Please do inform us if any such error or omission comes to your attention so that a correction can be made.

Download a PDF version of 'Parish Churchyard' by clicking the button below.