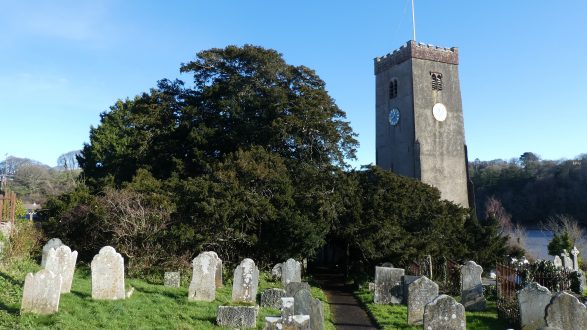 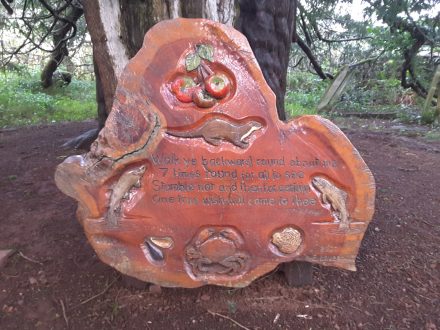 The Stoke Gabriel church yew tree is reckoned to be about a thousand years old. Yews are generally measured in girth at 1.5m above the ground to give a very rough idea about their age. Details of how to equate girth with age and yew culture are given in Fred Hagender’s book the Yew Tree (ISBN 978-0-7509-4597-4). I measured our yew girth as 5.65m in 2016 which gave an age of anywhere between 1000-2000 years.

Hagender’s book disputes many usually held ideas and questions the belief that original Christian churches were on pagan sites or that the English yew tree was used largely for English long bows. Firstly, the wood for long bows was devastating mature yews. Most long bows were then carved from imported European yew grown in mountainous areas where the yew was tight grained and more effective. There is also evidence that the Church tended to preserve its’ yew trees.

In 2007 David Treby asked me if I would do some small illustrated wood carvings to place around the yew. I happily agreed to his wish, depending upon what suitable wood I could obtain. At that time, I had noticed 3 large circular sections of rough sawn Leyland Cyprus wood outside David and Rebecca’s house in Rydon acres. I asked if I could have them for the church and they readily agreed. I decided I would use two of them but the third was unsuitable. The late Philip Gibbon planed the two to a perfect finish for carving.

With Dave’s agreement, I planned to produce one yew circle that listed important church and other events over the past 1000 years. Each ring corresponded to the chosen age of the event. The centre coincided with the possible age of the site of the first church (2000). Events would be carved between the appropriate the tree rings age.

The second circle would show some of the villages’ wild life and activities such as cider making and salmon fishing. These would be around the central carved poem (given to me by our verger Norman Betts) saying:

“Walk ye backward round about me

7 times round for all to see

Stumble not and then for certain

One true wish will come to thee”

The carving and multiple coats of varnish were the easy parts to do but how could I mount them? John Cox and the late Ted Cole came to my rescue and both carvings were supported on steel bars between the yew and the church path.